Every year Art-O-Rama invites an artist living and working in Marseilles or its area. Our guest artist for 2008 is Julien Bouillon.

Julien Bouillon (born in 1971, lives and works in Nice), never refuses the possibility to explore new materials or techniques or to use them contrary to their normally established modes of usage. The result is often troubling and destabilizing but never uninteresting. His most recent work consists of painting wooden panels of 33 x 33 cm. Working in layers, he piles on various pieces of paintings, copies of works by the grand masters of modern and contemporary painting, one after another. These paintings are then photographed, enlarged to 70 x 70 cm, and put behind glass frames, revealing the technique used in their making, their distance and their value as an object. During the time that the painting dries between each layer -time that can vary between a few minutes to several hours- he sculpts luxury watches out of cow bones, thus mixing up the production time of the sculptures with that of the paintings.

For Art-O-Rama, Julien Bouillon will be presenting a project entitled PERSPECTIVISME. Based on the ethnographic premise that in Amazonian culture, animals are thought to consider themselves human and to see humans as other animals, perspectivism posits that: any being that occupies a point of reference becomes a subject and must therefore be considered as part of the human race. According to both Nietzche and Leibniz, perspectivism does not mean “to each his truth”, but rather signifies that position/reference is conditional to the manifestation of the real. Thus Bouillon will propose a mise-en-scene for his photographs that suggests this dual point of view, somewhere between photography and painting. 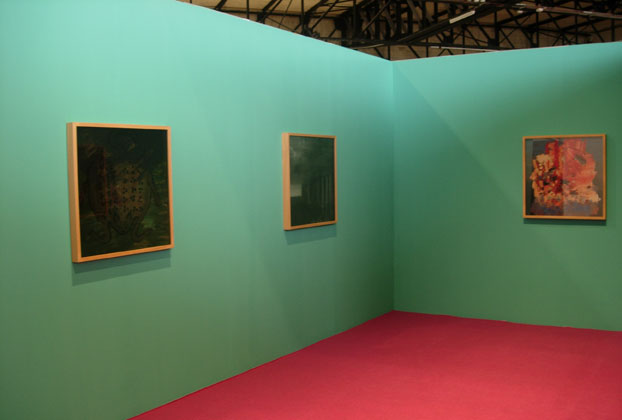